Why starling numbers are falling 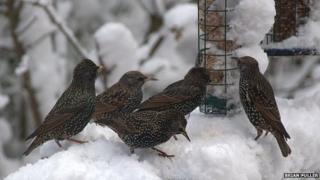 Research into falling numbers of starlings has found they have dropped by 80% since 1979 in the UK.

One reason could be that there is less grassland than there used to be because of intensive farming.

The birds find their favourite food, cranefly larvae, in soil that has not been disturbed but planting crops churns up the soil.

Across Europe, 40 million starlings have disappeared in the past 30 years.

Now, bird charity the RSPB is investigating the decline of Britain's starlings and is calling for more to be done to protect them.

Martin Harper, the RSPB's conservation director, hopes the research will help make sure the birds have a secure future.

He said: "Understanding exactly what is causing these declines will allow us to develop practical and cost-effective solutions for land managers and farmers.

"These could then be delivered through wildlife-friendly farming schemes."

Starlings can be aggressive and noisy in the garden but are impressive in the air.

The birds are known for the spectacular way they fly in large groups - a single flock of starlings can contain one million birds or more.

There were once so many starlings in London that they could stop Big Ben just by perching on it.

Some of the birds live in the UK all year round but others come to visit from Europe in the autumn and winter.