Van Persie in demand from Man United, City and Juventus 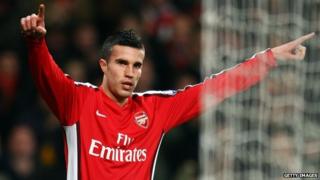 Arsenal's Robin van Persie is in high demand - Manchester United, Manchester City and Italian side Juventus have all made bids to buy the striker.

He's currently on contract with Arsenal until 2013 and had already said he won't be signing a new deal with them.

It's been reported that the three clubs put in offers of around £15 million for the Dutchman, who joined the Gunners in 2004 for £2.75m.