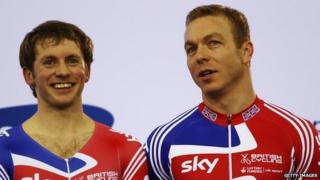 Jason Kenny has been selected to ride the individual sprint for Team GB at the London 2012 track cycling instead of Olympic champion Sir Chris Hoy.

The decision means Hoy will only be able to defend two of the three titles he won in Beijing in 2008.

Kenny has chosen after defeating Hoy at this year's World Championships.

Sir Chris Hoy said; "They made the right call. It is not about individual ambition it's about the team getting the most number of gold medals. They have picked the best sprinter."

British Cycling performance director Dave Brailsford said: "Both Chris and Jason are on great form and that made it a difficult choice but we have decided to select Jason to contest the sprint and Chris will concentrate on the keirin.

"We believe this gives us the strongest team possible going into the Games."

Hoy, whose last world sprint title came in 2008, will instead concentrate on the keirin, an event in which he is the reigning world and Olympic champion.