Bad weather could be over when jet stream moves

Weather forecasters say the bad weather could - possibly - come to an end soon.

The cold and wet weather has been because of the jet stream, a band of wind over the Atlantic Ocean, high in the sky.

Normally it is carried north of the UK, but in the last few weeks it has settled further south, which has given us our wet and windy conditions.

If it does move north again, it could mean the UK sees a bit more sunshine this summer.

It could even be better in time for the Olympics, say weather experts.

Some areas had a whole month's average rainfall in a single day.

During July, the government issued flood warnings in 171 locations around the country.

What is the jet stream? 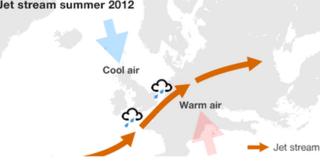 The jet stream has been further south than usual this summer

There are four jet streams circling the globe, two in the northern hemisphere and two in the southern.

They flow from west to east at a height of up to six miles.

The jet stream affects aircraft on flights between North America and Europe.

It means flights are a lot quicker coming into Europe because the jet stream helps to push the planes along.

When the jet stream is further south, as it has been this summer so far, the high winds suck water up from the Atlantic Ocean.

The water then lands on the UK - in the form of rain!