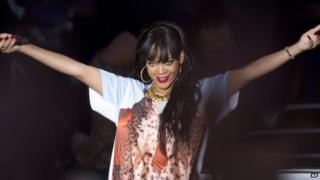 Pop star Rihanna has announced she'll be designing a range of clothes for River Island.

There's been rumours for a while after the singer was at the company's head office in February and has posted pictures of herself on Twitter wearing clothes from the designer in the past.

The boss of the high street clothing chain said the range will reflect RiRi's 'street to chic' style.

Her first collection will go on sale from spring 2013.