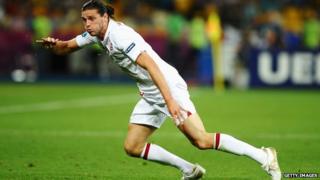 Newcastle United are expected to make an improved offer for Liverpool's Andy Carroll.

Newcastle want their former striker on a season-long loan with the option to sign him permanently in the future.

Their first bid was rejected on Sunday night after Newcastle only offered to pay part of Carroll's £80,000-a-week wages.

It's thought their was also problems with the transfer fee too.

Newcastle wanted to pay around £13 million for the England international but the Anfield club wanted £20 million.

Carroll joined Liverpool from Newcastle in January 2011 for a record £35 million.

It's understood that Carroll is interested in returning to his hometown club.