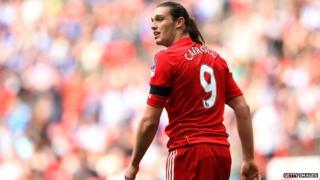 Liverpool have turned down an offer from Newcastle United for Andy Carroll.

Carroll joined Liverpool from Newcastle in January 2011 for £35 million, a record transfer fee for an English player.

Newcastle wanted to take the striker on a season-long loan and pay only part of his wages but Liverpool say that's not a deal they're interested in.

The 23-year-old has scored 11 goals in 56 appearences for the Anfield club.