John Terry not guilty of racism against Anton Ferdinand 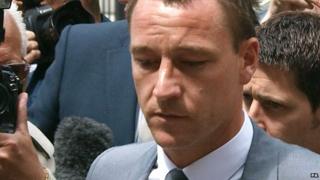 Terry told the court he was only repeating what he thought Ferdinand had said to him during their argument.

The 31-year-old didn't make any comment as he left the London court following the five-day trial.

The Chelsea skipper was stripped of the England captaincy in February because of the charges.

After the trial, Chelsea chairman Bruce Buck said: "We are pleased that John can now put his mind to football and go back to training and do what he's done for many years."