London 2012: Beckham talks of disappointment over not playing at the Olympics 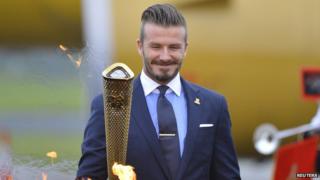 David Backham has spoken of his disappointment over not being selected for team GB.

He has been an ambassador for London 2012 and many people thought he would be part of the British Olympic football team competing in the games.

He was not picked to be one of the older players, Ryan Giggs was chosen to be the captain instead.

Beckham has spoken about the decision and said: "Perfoming in the Olympics would have been a very proud moment for me. Everyone knows how proud I am of representing my country and to do it in my home town, on such a big stage, would have been incredible, so of course yeah I'm disappointed."

He says he will be there to support the team though.

He also said that he is not the right person to light the Olympic Torch at the opening ceremony. He wants it to be lit by someone who has won gold medals for Britain at the Olympics.