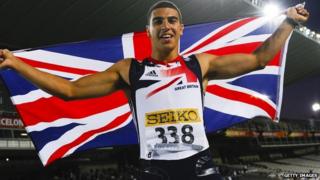 British sprinter Adam Gemili warmed up for the Olympics by winning gold in the World Junior Championships 100m in a new personal best of 10.05 seconds.

The 18-year-old was second at the Olympics trials, and only one other European runner has beaten his time this year.

It puts him equal sixth on the all-time world list for the under-20 age group. It makes him the fastest British junior of all time.

After winning the race he said: "It's a massive stepping stone. Just making the final was an achievement but the fact I won is so amazing. It's going to help me a lot at the Olympics."

Gemili is the fastest Briton over 100m this year but only started running full time in January.

He used to be a footballer and was a trainee at Premier League club Chelsea before moving to League Two side Dagenham & Redbridge.