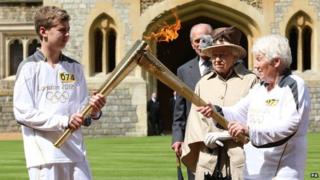 The Olympic torch relay got the royal seal of approval on Tuesday.

The flame headed past Windsor Castle, home to the Queen and the Duke of Edinburgh.

Lord Seb Coe, the man in charge of the Olympics, handed 12-year-old Phil Wells the torch in front of the Queen.

It's not just actual royalty who have been getting involved, sporting royalty have been taking part too. 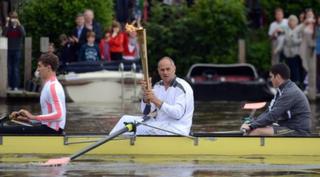 Sir Roger Bannister has carried the flame - he was the first man to run a mile in under four minutes.

He carried the flame on a boat while rowing one-handed to Henley-on-Thames.

A total of 8,000 people will carry the flame during its 8,000 mile, 70-day journey to the opening ceremony of the Olympic Games in London on 27 July.