What is the House of Lords? 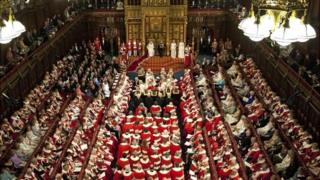 The House of Lords is Parliament's second chamber.

Its main job is to 'double check' new laws made by the House of Commons to make sure they are fair and will work.

There are around 780 members of the Lords, but that number is not fixed.

Lords are not elected by the people. Some are appointed by the King or Queen at the time, after they have been recommended by the Prime Minister.

Some of the Lords are 'hereditary peers'- they are Lords or Ladies because their parents were.

All the hereditary peers in the country used to be allowed in the House. But recent government changes mean only 92 of them are allowed now. They are chosen by the other Lords.

Some people think there shouldn't be any hereditary Lords in the House at all.

The House of Lords does not have the power to stop a new law that the Commons wants, but it can delay it.

It can do this because bills must go through both Houses before they become 'acts' (laws).