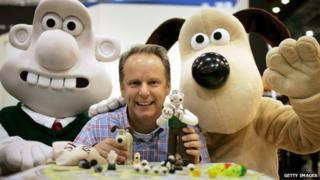 Together they're crackin' but would Gromit be as smart if he was a cat?

Well Wallace and Gromit's creator Nick Park has revealed that the famous dog was actually supposed to have been a cat.

Park said that when he was first making Wallace he imagined the inventor having a feline side-kick.

But after trying to make the first model out of clay, he decided that it was easier to make a dog!

Park said that Gromit's silence also was an accident.

To begin with, the dog was supposed to be "bouncy, extrovert character but on the first day of shooting, he was too hard to move."

Wallace and his canine apprentice will be next appearing at the BBC Family Prom at the end of July.