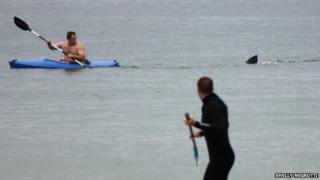 One kayaker had a lucky escape after he spotted a great white shark.

Walter Szulc was paddling near Cape Cod in the east of America when he saw the animal's fin behind him.

Despite being his first time in the ocean, Mr Szulc managed to stay calm and paddle quickly back to shore.

Experts think that sharks come to the area to eat seals, one of their favourite foods.

Mr Szluc said: "I saw the fin out of the water. I looked down and saw the body and realised that part of the shark was underneath me."

The beach was closed after the ocean predator was seen, but no more sharks have been spotted in the area since.