While most of the race takes part in the towns, cities, countryside and mountains of France it also often starts in a foreign country.

And it's absolutely free to watch - you just have to get there early to beat the crowds and find a place to stand!

So do you know your yellow jersey from your polka dot? Your mountain stage from your flat?

If not, Newsround is here to help you enjoy this epic race!

Who is the champ? 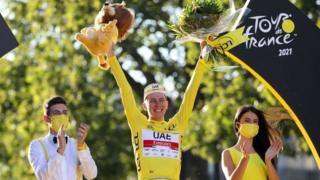 The reigning champ is 22-year-old Tadej Pogačar The Slovenian cyclist became the youngest rider in 110 years when he won the yellow jersey in 2021.

The first person to win the yellow, polka-dot and white jerseys two years in a row. 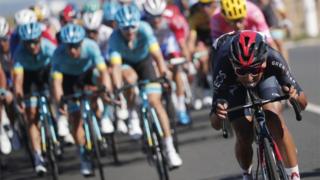 Basically, it's a huge bike race around France!

Millions of people line the route that's made up of 21 stages raced over 23 days - that means they only have two days off to rest. Ouch!

Twenty-two teams from right across the world are involved in the Tour, with each having up to nine riders.

The riders average around 25mph over the entire course but at some points they'll go a lot faster than that, sometimes over 70mph! 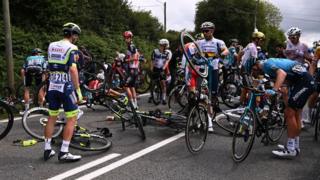 Getty Images
And high speed, there are sometimes spectacular crashes, but the race carries on regardless.

Every wondered why the riders are so thin? Well, it's fair to say it's a good way to keep fit.

If you finish the gruelling Tour, you could burn off up to 118,000 calories.

That's the equivalent of 26 chocolate bars per day!

The race is broken up into 21 different parts or 'stages' and it isn't just flat roads. The Tour takes the riders up into the mountains too.

Prologue: Each rider races against the clock in a short (usually under six miles) time trial.

Flat: Despite the name, it doesn't necessarily mean it's perfectly flat. Usually it's big packs of competitors riding together in a big group or 'peloton' for around 125 miles. These end in one of two ways - a 'breakaway' victory by an individual or small group, or typically with a hair-raising bunch sprint.

Time trial: A race against the clock. Similar to a prologue but a little longer. These are shorter stages of around 30 miles (as opposed to 100-125 miles). Sometimes riders do it by themselves, sometimes they ride as a team

Mountain: These come in all shapes and sizes, climbing from sea level to 2,000 metres sometimes more than once in a day. Tough! 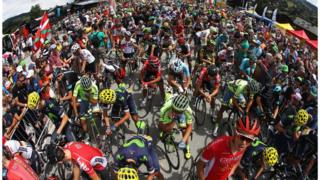 Getty Images
Is it the Tour de France or Where's Wally for cyclists?

The race was started by Henri Desgrange as a publicity stunt back in 1903.

He came up with the crazy idea of a bike race around France in order to raise the profile of L'Auto, the newspaper he worked for.

The first race was a huge success with 60 riders covering an amazing 1,500 miles.

The Tour is now like one big race with lots of smaller races going on inside it.

What do the coloured jerseys mean? 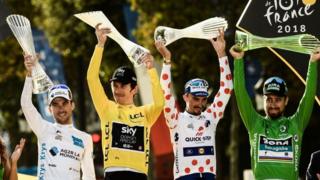 Getty Images
The Tour de France podium in 2018, with the winners of each shirt celebrating

Riders might race for each stage win or to earn the right to wear one of the famous jerseys, which can change hands many times during the race:

The green jersey is the points prize. You get points for being one of the first riders over the line on each stage. It's usually won by a sprinter.

But the tour isn't just about reaching the highest speeds - it's also known for its uphill struggles. The riders climb thousands of metres up Alpine mountains, with the best rider on those stages winning a snazzy red and white polka dot jersey.

The white jersey is given to the best young rider - that's someone who's under 25 years old.

But the prize everyone dreams of is the yellow jersey. Riders compete fiercely to even have the chance to wear it for one day during the race, let alone to be wearing it as the winner at the end. If you are wearing the Maillot Jaune (Yellow Jersey) it means you are the overall race leader on total time since the start of the Tour.

Tour champions are often strong at everything - climbing, sprinting and time-trialling. 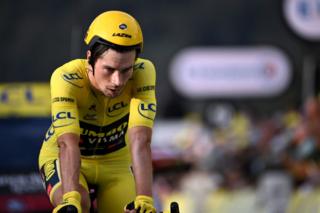 Getty Images
In the 2020 Tour de France, the yellow jersey wearer - and expected winner - Primoz Roglic ran out of puff on the final day of racing and lost the title and the jersey
So is it all about individuals?

No. It's a big team event but each team has a leader who is very important. The team leader is usually the strongest rider.

The other team members are traditionally called domestiques, from the French word for servants.

These riders work hard in every stage to protect their team leader.

They even have to go and fetch water for him (and everyone else) if he needs a drink and if he gets a puncture, they will wait while the team mechanic changes his wheel. Some even have to hand their bike over to him if he needs it! 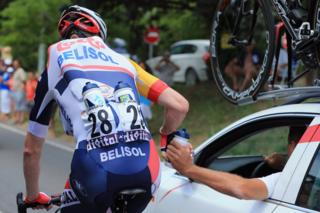 Getty Images
A rider for the Lotto-Belisil tucks fresh water bottles for the team into his pockets and shirt - how many can he carry?!

The star-man will ride behind his team mates - they protect him from the wind which makes it easier for him and he gets less tired.

Their reward is a share of the prize money and the glory of contributing to a successful team. 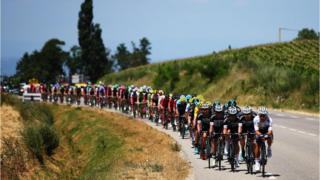 Getty
The peleton rides together as a group in formation

When the race is going on, lots of riders often ride in a big group called the peleton.

This is when they all ride together in formation to save energy - a bit like a flock of birds.

Does it only take place in France? 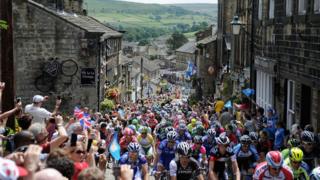 Gareth Copley
In 2014 the Tour De France had stages in Yorkshire. Here they are riding up Haworth high street!

No - it regularly nips into other countries that border France and sometimes the race even starts in another country.

The first two days of racing, the Grand Depart, are traditionally held in a new location every two years.

Since 2014, Yorkshire has hosted its own cycling race inspired by hosting the Grand Depart, called the Tour de Yorkshire, which now takes place every year.