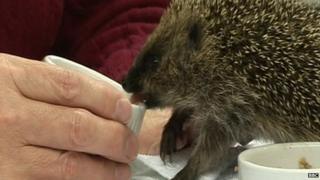 There are calls for more protection for hedgehogs after a report showed their number have fallen by about a quarter in the last 10 years.

Former politician Ann Widdecombe, who was a contestant on Strictly Come Dancing, has told the BBC that she wants there to be a protected status for hedgehogs to preserve the species.

She said: "What we want is the same protection for hedgehogs as we already give to bats, the red squirrel and dormice.

"Mainly I'm concerned for the preservation of the species... if we just ignore the hedgehog and think, oh well, nearly a million that's plenty, it could be none, and then it would be too late."

A recent report called The State of Britain's Hedgehogs shows that numbers have dropped dramatically in the last decade.

The reasons for the decline are thought to be down to changes in how farmers work and more roads, houses and fences being built which stop hedgehogs finding enough food.

Hedgehogs are the only British mammal with spiky spines on their coats.

When threatened they will roll into a tight ball, with the spines providing sharp protection from predators.

Hedgehogs aren't fussy when it comes to food they eat worms, slugs, frogs and even bird eggs.

The name for a baby hedgehog is a hoglet. They are born with soft spines under the skin to protect their mum but a second set of spines come through after a couple of days.