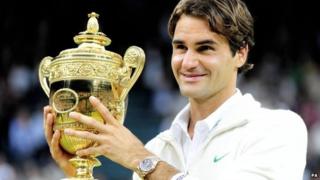 A bet placed on Wimbledon champion Roger Federer nearly ten years ago has won more than £100,000 for the charity Oxfam.

Mr Newlife died in 2009 but left the betting slip to Oxfam in his will.

Federer's triumph over Britain's Andy Murray in Sunday's Wimbledon final means the charity will now collect a payout of £101,840.