Vote could lead to women bishops in Church of England 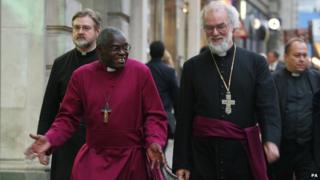 The Church of England could vote on letting women be bishops - a top job in the church.

Although a woman can be a vicar - in charge of one or two churches - there is still a rule that stops women being bishops.

The group of people which makes the Church of England's big decisions is called the General Synod.

The vote will decide if rules that have been in place for thousands of years should be changed.

Some are against change

Some people are against change because traditionally only men have been church leaders.

But others say there is no reason that women shouldn't be in the church's positions of power.

Women already make-up a third of the Church's 11,000 priests and several have reached other senior church positions.

If they are allowed to become bishops they will have much more of a say on the bigger decisions that are made.