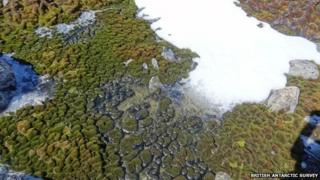 Ever wondered how anything survives in the frozen Antarctic?

Well moss does it by feeding off penguin poo that's thousands of years old!

Scientists studying the moss realised that it was living on the site of an ancient penguin colony.

Because Antarctica is so cold, nutrients from the poo has remained frozen in the soil.

Professor Sharon Robinson who studies Antarctica's plants says: "Between 3,000 and 8,000 years ago, on the site where the moss is now growing, there used to be (Adelie) penguins.

"There's fossil evidence to support that, and the little pebbles that the penguins use to make their nests are actually still there. The other thing that's still there is the penguin poo."

Plants need water, sunlight and nutrients to live. There's lots of water and sun in the Antarctic, but for the moss it's ancient penguin poo providing the nutrients!