Magic Murray through to the Wimbledon semi-finals

Andy Murray is through to the Wimbledon semi-finals after beating Spain's David Ferrer on Centre Court.

It was a real nail-biting fight for Andy. He went a set down and looked as if he was about to lose the second.

But the Scot battled back and took the match in four sets which included three tie-breaks.

Andy will now play Jo-Wilfried Tsonga on Friday for a chance to reach his first ever Wimbledon final. 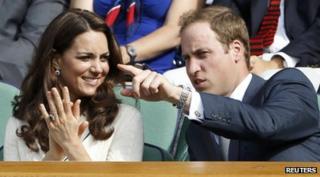 Reuters
Andy was cheered on by Prince William and Kate

The British number one has now reached the semi-finals of Wimbledon four years in a row.

David Ferrer was easily Andy's hardest match so far in this year's tournament.

Although he started badly there were moments of real Murray magic in the four-hour showdown.

Andy's serve looked especially ferocious and it came to the Scot's rescue on a number of occasions.

Now the pressure is going to get far, far greater!

If he gets to the final, either Roger Federer and Novak Djokovic lie in wait!

No British man has won Wimbledon since Fred Perry in 1936.