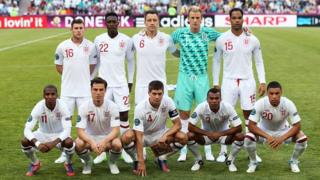 England have risen two places to fourth in the Fifa world rankings despite their Euro 2012 quarter-final exit.

European champions Spain remain number one, while beaten finalists Italy - who knocked England out on penalties - go up six places to sixth.

The 2014 World Cup hosts Brazil have dropped out of the top 10 for the first time, falling five spots to 11th.

Wales remain 38th, Scotland are ranked 49th - down eight places - while Northern Ireland move up one to 102nd.

The Republic of Ireland, who lost all three group matches at Euro 2012, fall to 26th from 18th.

Both defeated Euro 2012 semi-finalists rise in the rankings - Germany up a place in second while Portugal climb five places to fifth.

The Fifa world rankings are put together every month.

Ranking points are built up according to results, the importance of the matches played, and the strength of opposing teams.

Five-times world champions Brazil do not have to qualify for the World Cup, because they are hosts.

But the Brazil team have played less top-level matches in 2012 than some of the others in the top of the table.