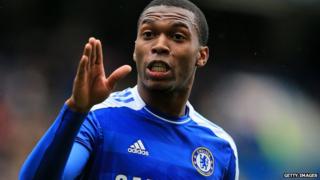 Striker Daniel Sturridge is being treated after tests confirmed he has viral meningitis, says his Chelsea boss Roberto Di Matteo.

But he was taken ill over the weekend and had tests at a hospital in London.

Di Matteo said he expects Sturridge to recover in time for Team GB's first football match of the Olympics.

Meningitis is a disease which can make people very ill.

It's an infection affects the brain and spine.

There are two types - bacterial, which is severe, and viral which is less serious.

One of the most common signs is a rash of tiny red or brown marks on the skin which can change colour.

There's a test to see if it may be to do with meningitis or not - press a glass against the rash.

If the marks do not fade then this may be a rash from a form of meningitis.

As well as a rash, some of the other things you can feel with meningitis are:

The risk of getting meningitis is very low. If you are feeling unwell, it's important to always tell your parents.