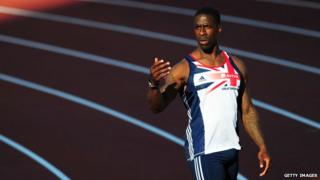 Sprinter Dwain Chambers has been selected to run for Great Britain at the Olympics.

He was caught taking performance enhancing drugs in 2003 and for British athletes that used to mean a life-ban from the Olympics.

The rules were changed in May meaning Chambers can now represent his country in the 100m and relay races.

He said "For me representing my country in an Olympics is a privilege that should never be taken for granted."

In total there are 77 athletes in the team.