Wimbledon: Sharapova out, Federer and Djokovic in 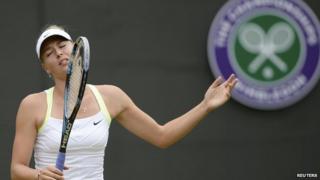 Top women's seed Maria Sharapova is out of Wimbledon, losing to Sabine Lisicki of Germany.

Women's world number one Sharapova was one of the favourites to win the tournament.

But she was beaten in two sets 6-4, 6-3. It's another shock in the competition that's seen it's fair share of surprises.

Kim Clijsters also went out in the fourth round, losing to Angelique Kerber of Germany.

This will be the last time that Clijsters competes at Wimbledon as she's due to retire later this year. Since turning pro in 1997, she's won four major titles.

Federer and Djokovic in quarter-finals

In the men's game, Roger Federer is into the last eight after beating Xavier Malisse in four sets in the fourth round. 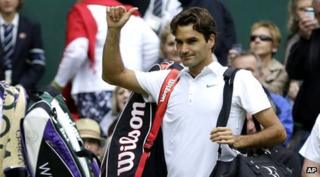 AP
Federer is through to the quarter-finals

World number one Novak Djokovic is also through to the quarter-finals after defeating Viktor Troicki in straight sets.

It puts more pressure on Andy Murray, who has to continue his match against Marin Cilic on Tuesday after rain stopped Monday's play.