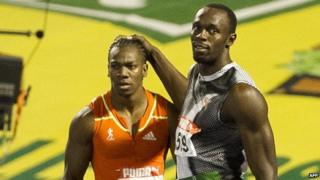 Record-breaking sprinter, Usain Bolt lost out to his team-mate at Jamaica's Olympic trials.

Yohan Blake beat the Lightning Bolt across both 100 and 200 metres.

After the race, Bolt said: "I'm the Olympic champion, I have to show the world that I'm the best - so I expect to come back."

"I'll have to figure out what I did wrong and work on it," he said.

But now people are talking - wondering whether he really is still the fastest man in the world.