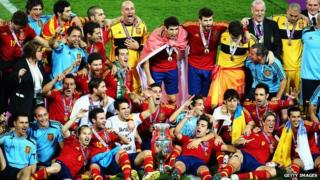 Spain are champions of Europe yet again.

Their 4-0 win over Italy topped off a record-breaking summer.

They've now been hailed the greatest team ever and it's easy to see why.

It's the third major tournament in a row they've won (Euro 2008, World Cup 2010 and Euro 2012) and the 4-0 scoreline was the biggest ever win in a European Championship or World Cup final.

They've even got the Golden Boot for Fernando Torres who top-scored at the tournament. Who'd have thought that after his season with Chelsea?

So while you're getting used to not having football to watch when you get in from school, we thought we'd get Ore to take a look back at some of the players who've impressed in Poland and Ukraine.

And no - they're not ALL Spanish!

Ore's Team of the Tournament

The Italian 'keeper is my number one. The veteran stopper has now played 24 matches at major tournaments, equalling the great Dino Zoff's Italian record. Experience was definitely on his side during his heroics in the penalty shootout against England.

The German captain helped his team get the to semis before losing out to an in-form Italy side. The 28-year-old also grabbed a good goal against Greece at the quarter-final stage.

The Real Madrid defender had more shots than any other defender at Euro 2012. He also took a leaf out of Pirlo's book with a calmly-chipped penalty in the shoot-out against Portugal - cheeky.

The former Manchester United man had a fantastic partnership with Ramos at the back. He was a big part of the reason that Spain only conceded one goal in the whole tournament.

The full-back topped off a brilliant tournament with a fantastic goal in the final. Barcelona have recently shelled out just over £11 million for the defender.

If his displays this summer are anything to go by, he could prove to be the bargain of the transfer window. That's nearly 3 Jordis for the price of one Andy Carroll!

CR7's main memory of the tournament will probably be not getting to take a penalty against Spain in the semis. It was a disappointing end to a great tournament for the Real Madrid legend.

The 33-year-old scored a great free-kick against Croatia and an amazing penalty against England.

He always seemed to have time and space on the ball, regardless of what was going on around him - the mark of a world class player. He has quality and technique by the bucket load.

If you stand out in the Spain team, you need to be pretty good. Xavi's their pass-master at the centre of the midfield. The Barça star overtook Zinedine Zidane as the player to have made most passes in the history of the European Championships (949) and also set up the most shots in the competition (25).

My fifth and final Spanish player in the team. Iniesta joins his Barça team-mate in the centre of my midfield. His 11 shots on target without scoring was more than any other player at the European Championship finals.

One of my two Marios up front. The Bayern Munich striker scored three goals and got one assist in his five appearances. Two of those goals were absolute crackers against the Netherlands in the group stages.

The Man City striker proved he was a class act by finishing the joint top-scorer at the tournament. He also became the first Italian player to score three goals in a single European Championship. Not bad.