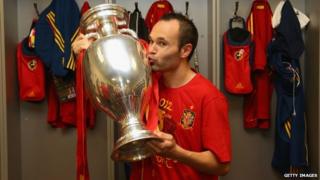 Spain's Andres Iniesta has been named the best player of Euro 2012.

The Barcelona midfielder was selected by Uefa after helping Spain beat Italy 4-0 in Sunday's final.

Uefa praised Iniesta for his "creativity, incisive football and humility". He played every game for Spain in the tournament.

He was one of 10 Spanish players in Uefa's 23-man team of the tournament, with Steven Gerrard the only England player to make the selection.

Liverpool midfielder Gerrard and Sweden striker Zlatan Ibrahimovic were the only selections in the team of the tournament from sides that did not reach the semi-finals.

Others to be recognised for their performances in Poland and Ukraine include Italy's Andrea Pirlo, and Portugal winger Cristiano Ronaldo.