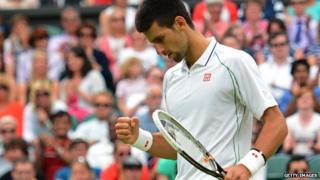 World number one Novak Djokovic made his way through to the fourth round at Wimbledon despite a rocky start.

The Serbian tennis star lost the first set of the match against his opponent Radek Stepanek of the Czech Republic.

For a while it looked like he might suffer the same fate as world number two Rafael Nadal, who was knocked out in a shock defeat on Thursday.