Heather Watson crashes out of Wimbledon 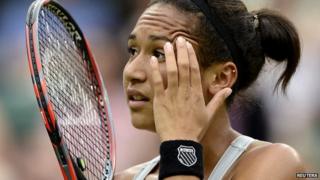 Watson gave an amazing performance in her first two rounds, but cracked under pressure, losing 6-0 6-2.

In just 58 minutes her Polish opponent, who is 100 places above Heather in the world rankings, stormed to victory.

The defeat means Andy Murray is now the only British hope left for the singles at SW19.