Wimbledon: Andy Murray into third round after Karlovic win 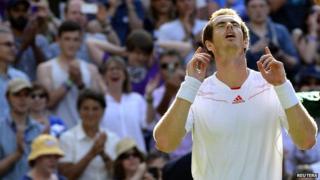 It's a good win: Croatia's Karlovic is a tough opponent, standing nearly SEVEN FEET tall and with a massive serve.

It wasn't as easy a win as Murray's first match against Davydenko; Murray won the first set but Karlovic took the second on a tie-break.

Afterwards, Andy said Karlovic is "so tough to play against, you can't really prepare for it."

He went on: "It's so challenging getting into a rhythm against a guy like that.

"Tie-breaks can be a lottery against him - you need to get your racquet on the returns and hope he makes a mistake."

Andy's fellow Brit Anne Keothavong didn't have such a good day though - she lost heavily 6-1 6-1 to to French Open finalist Sara Errani.