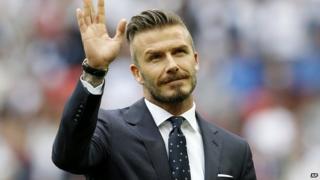 Football hero David Beckham says he has failed to make it into the British Olympic football squad.

The former England captain wasn't on the final 18-man list.

The Olympics football team is made up of mainly younger players, although three players over 23 are allowed to compete.

But David isn't one of them. In a statement, he said: "I would have been honoured to have been part of this unique Team GB squad."

He added: "Everyone knows how much playing for my country has always meant to me."

Beckham said: "Naturally I am very disappointed, but there will be no bigger supporter of the team than me. And like everyone, I will be hoping they can win the gold."

It's not yet been officially announced who is on the final list.