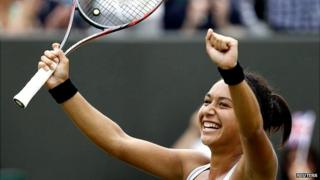 Britain's Heather Watson has become the first British woman to reach the Wimbledon third round since Elena Baltacha back in 2002.

Watson went into the match three places below her opponent in the rankings but now she'll be hoping to become the first British woman to reach the last 16 since Sam Smith in 1998.

The 20-year-old from Guernsey said: "I always knew I could play this well, I could get far in these tournaments.

"But it's different playing like that in practice than bringing it onto the match court at big occasions with pressure."

"All I was saying to myself was: 'Don't double-fault', but I stayed calm and stayed focused and knew I had to go for it."