A robot that always wins the game of Scissors Paper Stone - or Rock Paper Scissors - has been invented by scientists in Japan.

Researchers at the University of Tokyo reckoned they've developed a way for it to win every time.

It uses extremely high-speed vision to analyse what the human hand is doing first.

It takes just one millisecond - a thousandth of one second - and then does a different move to beat it!

Although that probably counts as cheating, as the rules of the game say that players need to make their move simultaneously.

One millisecond is too short a period of time for us to realise we are being cheated by the robot. 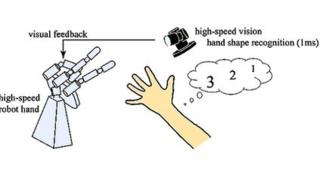 University of Tokyo
After the high speed camera spots the movement of the human hand, it puts the robot hand out - and wins!