Ants use 'smelly trail' to help each other 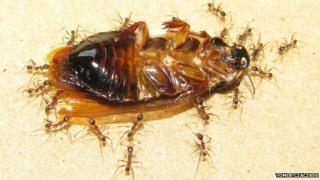 Brazilian "big-headed" ants use a smelly trail to get help from other ants to lift heavy snacks, say scientists.

Tomer Czaczkes, the ant expert who led the study says: "When an ant finds something delicious it has to lay a trail really quickly, because competition is fierce."

If it can't lift the food by itself, it goes back to the nest and lays a trail of smelly chemicals so they can follow it back later.

The smell signal means the other ants can quickly detect the food and bring it back to the nest.

The smell trail is so effective it attracts other ants to the food within seconds.

"That's important, because for an ant, it's dangerous to be out of the nest," said Dr Czaczkes. 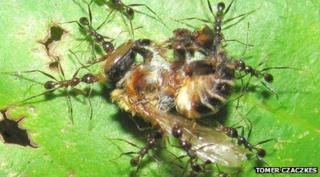 Tomer Czaczkes
Ants have to help each other move big objects like this bee.

The scientists' findings reveal that only ants and humans can organise into groups to shift heavy objects.

By asking for help from other ants the group can bring back food from as far away as eight metres.