Wimbledon: Murray powers through round one at Wimbledon 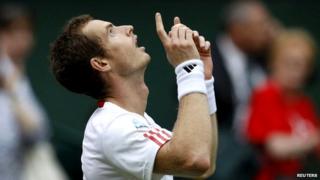 Andy Murray won his first match at Wimbledon 2012 in just over an hour and a half.

Murray pointed to the sky to celebrate his win and the crowd at Centre Court clapped and stood up to show their support.

After winning the match he said: "It's never easy playing in the first round at Wimbledon, but it was a good start."