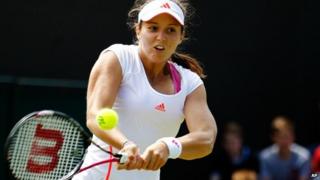 Britain's Laura Robson put up a brave performance in her first round match at Wimbledon - but lost to the Italian Francesca Schiavone.

Other British hopes still in the tournament are Anne Keothavong, Elena Baltacha, James Ward and Jamie Baker; with Andy Murray beginning his campaign against Nikolay Davydenko in the third match on Centre Court.