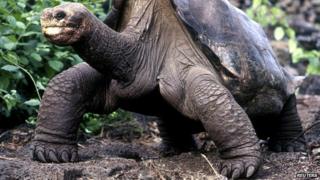 Lonesome George, a giant tortoise believed to be the last of his kind, has died.

Scientists say he was about 100 years old.

George became known as the rarest creature in the world, because he had no children and no one has ever found another giant Pinta tortoise.

Tortoises on the Galapagos Islands, near South America, were hunted to near extinction for their meat around a hundred years ago.

Since then real efforts have been made to increase the number of giant tortoises on the islands.

In fact there are now over 20,000 giant tortoises of different types living there. But none the same as George.

Environmentalists repeatedly tried to get George to mate with a female tortoise to continue the Pinta species.

But it didn't work and now that George has died his specific subspecies, the giant Pinta tortoise, has become extinct.