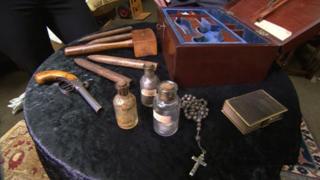 A vampire slaying kit from Victorian times is going up for auction in Yorkshire.

Included in the 19th century set are a pistol, a mallet and four wooden stakes to drive into the heart of a bloodsucker.

There are also old bottles of garlic, sacred earth and holy water to help ward off the toothy villain.

The stakes don't have any blood on them so it's believed they haven't been used before!

Nigel Smith from Tennant's Auctioneers, North Yorkshire, says he expects the kit to sell for around £2,000, adding that there'd been "tremendous" interest from across the world.

Mr Smith said these kits are rare: "I've been in this business about 30 years and I've sold one other one about 15 years ago from a museum in York."