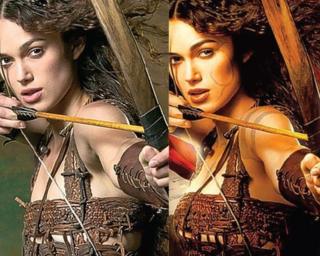 A guide for parents to promote positive body image to their children has been launched.

It includes before and after pictures of celebrities that have been digitally enhanced using computers.

The aim is to show kids that photos of stars and models are often not a true reflection of what they actually look like.

The pack has been put together by the organisation Media Smart and has been backed by the government.

The split image above shows British actress Keira Knightley, who was enhanced to make her look more tanned and with smoother skin (on the right).

Britney Spears also features in the pack, which can be downloaded from the Media Start website.

We asked you what you think about this guide and whether you think it will it work?

"It doesn't really bother me because I am happy with how I look."

"I think that this is a good idea, especially for teenage girls who aspire to look like their idols. This guide will show them that being yourself is a good idea."

"In my opinion this guide is a good thing. When edited pictures are in magazines they inspire kids to be more like them, but they are all edited and it sets a bad example."

"Photoshopped images should not be used in magazines, adverts or posters because they are not true to life and young children/ teenagers will believe that they are not attractive or pretty because of these fake images." Sophie, Newtown, Wales

"I think it's good to show what they really look like because they would never look like that in real life." Niamh, London, England

"Yes, as it will show younger children that nobody is perfect. We all have spots, this should have happened a long time ago." Ruth, Northern Ireland

"I think it's a good idea to teach children that it isn't about how you look that gets you far in life." Don, Abbey Wood, London

"We think that it is good to educate children in this way so that they learn that these images are not real and not to be sad if they don't look the same. We also think that children should enjoy comics instead of magazines." 3RM, Fryent Primary School, London