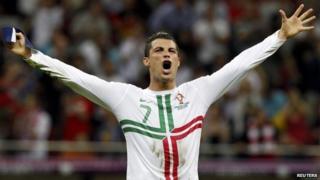 Cristiano Ronaldo was the star of the show as Portugal dominated the Czech Republic to go through to the Euro 2012 semi-finals.

The former Man United star, who's now at Real Madrid, scored the game's only goal but played brilliantly throughout.

Ronaldo came close to scoring two other goals, hitting the post once in each half, before a superb header 12 minutes before time clinched the win.

After the match, he said: "Our great aim is to get to the final."

The route to the final

To reach the final, Portugal will need to beat either Spain or France in the semi-final. Those two teams play each other on Saturday.

In the other quarter-finals, Germany play Greece on Friday and England face Italy on Sunday night.

The Czechs played bravely and held off Portugal's attacks for most of the game. Their strategy seemed to be to try to contain the talents of Ronaldo and Nani, and rely on counter-attacks.

But Portugal kept pressing hard, and the stats don't lie: they had 19 shots on goal compared to just two from the Czech Republic.

There was great support from his former Man United team-mate Nani, but Ronaldo was the player to watch.

BBC Match of the Day pundit Alan Shearer said: ""Ronaldo was exceptional. The desire, the hunger to get in the right place.

"He got on the end of the cross and deservedly got his team into the semi-finals. He was the stand-out player."