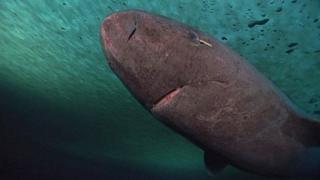 Being chased by a shark is the stuff of nightmares, but you wouldn't need to worry if it was this one - it's the world's slowest shark!

Scientists have tagged the Greenland shark and found they 'cruise' at just 34cm per second, which is slower than most people's walking speed.

They discovered the big fish were far too slow to catch a seal, their main source of food.

So researchers reckon the sharks have to sneak up on them while they sleep!

It's thought that these sharks swim this slowly because they want to save energy.

They live really far north where temperatures are near freezing - around 2 degrees Celsius.