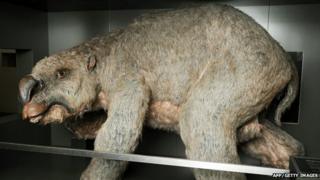 The biggest fossil find of an ancient "mega wombat" has been unearthed in Australia.

Up to 50 skeletons of the diprotodon, the largest marsupial that ever lived, were found in a remote desert.

Scientist Scott Hocknull described the creature as "a cross between a wombat and a bear but the size of a rhinoceros".

It's hoped the discovery will help researchers work out how they became extinct.

The diprotodon roamed the Earth between about 1.6 million and 50,000 years ago.

It had a backward-facing pouch that would have been big enough to carry a human.

Among the fossils was a huge specimen called Kenny, who had a massive jawbone 70 centimetres long!