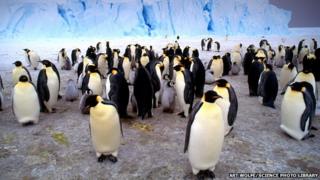 Emperor penguins numbers are falling because of melting ice caps in the Antarctica, scientists have warned.

They say breeding pairs of the famous bird may fall by about 80 per cent by the year 2100.

Unlike other sea birds, Emperor penguins breed and raise their young on sea ice.

That means if the ice breaks up and disappears, they will have nowhere to look after their babies.

Scientists also warn disappearing ice may affect the fish, squid and krill that the penguins eat.

This will cause problems all the way up the food chain and many species of marine life may end up starving to death.

The study said that another penguin population, the Dion Islets penguin colony close to the West Antarctic Peninsula, has already disappeared completely, possibly because of a decline in Antarctic sea ice.