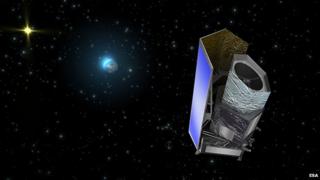 A new telescope is going into space to investigate the "dark universe".

The super expensive machine is being built by the European Space Agency and the UK will play a big part in creating it.

It will be called Euclid and investigate dark matter and dark energy.

Scientists say these are everywhere in the Universe but they don't know very much about them.

Dark matter can't be detected itself, but scientists know it's there because it affects other things we can see in the Universe.

For example, dark matter is the stuff that helps give galaxies their shape - like scaffolding holding up the shape of a galaxy.

The Euclid telescope will investigate this dark matter by looking at how it affects light coming through from distant galaxies.

Dark energy on the other hand appears to affect how fast the Universe is expanding.

So the Euclid telescope will map out how galaxies are spread out in the Universe, and how, as time goes by, this is changing.

Building, launching and operating Euclid will cost a massive £480million, with about £80million coming from the UK.

The UK will be in charge of the telescope's digital camera, which will be one of the largest cameras of its kind to head into space.