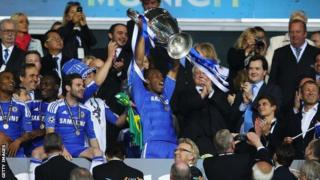 He will team up again at Shanghai with his ex-Blues striking partner Nicolas Anelka.

Drogba said: "I considered all the offers I have received in the past few weeks, but feel Shanghai Shenhua is the right move for me at this time."

The Ivory Coast forward's last act in a Chelsea shirt was scoring the winning penalty in the Champions League final against Bayern Munich.

One of his first games will be against Manchester United with Alex Ferguson's team playing Shanghai Shenhua on 25 July as part of their pre-season tour.