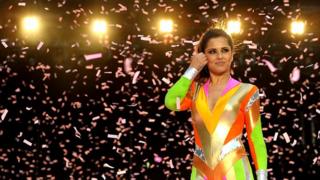 Cheryl Cole's single, Call My Name, has gone straight in at number one.

It sold 152,000 copies in its first week, making it the fastest-selling single of 2012, bumping Gary Barlow's Diamond Jubilee track, Sing, from the top spot.

The first two were Fight For This Love, lead single from her debut solo album in 2009, and Promise This from her second album in 2010.