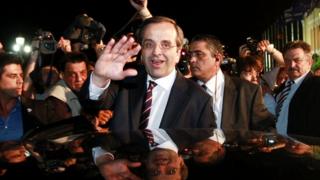 The people of Greece have voted for the new leaders of their country.

They have chosen the New Democracy party who plan to impose strict spending cuts to take control of the country's money problems and keep the Euro as its currency.

It was the second election in 6 weeks because last time no single party could get enough votes to be clear winners.

Even though New Democracy party won, once again they didn't get enough votes for an out-right win.

So they'll have to team up with another party to form a coalition, like we have in the UK.