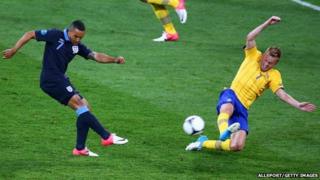 It was a nervous night for England fans, who saw their team come from behind to beat Sweden 3-2.

England now just need to draw against Ukraine in their last group game to reach the quarter finals.

"To come on as a sub and score such a good goal and set up a winner, he's got to be very pleased."