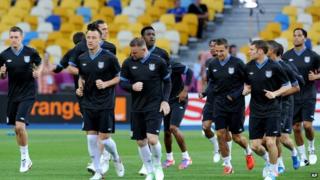 If England win against Sweden in Kiev it'll be the first time they've ever beaten the team in a competitive game.

The pressure is on for Roy's boys for their second Euro 2012 match after drawing 1-1 with France on Monday.

Hodgson is ready to take a gamble by bringing back Andy Carroll to play up front with Danny Welbeck.

He'll be hoping the big man's super headers bring in the goals by exploiting vulnerability in the Scandinavians' defence.

Team captain Steven Gerrard is feeling confident, saying, "With all respect to Sweden, who are a good, strong team, they're not France so we can be more bold and ambitious and get at them."

"If we perform to the same level we're confident of victory."