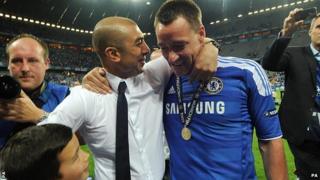 Chelsea have named Roberto Di Matteo as their permanent manager on a two-year contract.

Di Matteo won the Champions League and FA Cup as interim coach following the sacking of Andre Villas-Boas in March.

But despite his success there were doubts over whether he'd get the job full-time with Chelsea owner Roman Abramovich keen to bring in ex-Barcelona coach Pep Guardiola.

It's a big turn-around for Di Matteo, who was sacked by West Brom last year.

Di Matteo said: "We all achieved incredible success last season that made history for this great club.

"Our aim is to continue building on that and I'm already looking forward to the squad's return for pre-season."

The former West Brom and MK Dons manager lost just three of his 21 matches in charge as he led the club to a Champions League final success over Bayern Munich and FA Cup final defeat of Liverpool.

Several of his club's senior players voiced their support for him to be given the role, and Blues chief executive Ron Gourlay believes the Italian is the man to lead the club forward.

Gourlay also revealed Di Matteo had been involved in the decision to make recent signings with the club having already made the big-money capture of Eden Hazard.

"Roberto's quality was clear for all to see when he galvanised the squad last season and helped the club make history, and the owner and board are very pleased he will be continuing his good work," he said.

"We all believed he was a young coach with much to offer when we first asked him to take charge of team affairs in March and the manner in which he worked with us, the players and all the staff, and the success that followed, made him the clear choice when it came to selecting the person to take us forward in the seasons to come.

"Although he has set the bar very high in the short time he has been in charge, we know that Roberto is the right man to lead Chelsea onto further success.

"We are already looking forward to the 2012-13 season which kicks off when Roberto, his staff and players return for pre-season."